On 22nd February 1955 the first officially elected officers applied to the Warwickshire County Board to form the Four Masters Gaelic Club. Prior to that, in September 1954 P.J. Burke and Myself, Patsy Meehan came to Coventry and Lodged in Number 9 Percy Street. On our Travels we met up with a lot of Donegal players, many of whom we knew such as Liam Angus, Jim Brogan, Jimmy Kerrs and Hughie Kennedy. The Main Conversation was usually Gaelic Football. We came to realise that we could form a Donegal team and we worked towards this objective by organising meetings and functions. Over time we progressed to training sessions and practice matches. 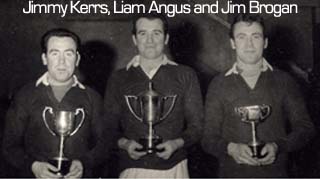 We named our club after our home club: The Four Masters in Donegal Town. It wasn’t acceptable to register as a Donegal team so the Donegal name was removed and membership was open to all. A committee was elected later in 1955 and comprised Peter Clancy, Willie McIntyre, John Diver, Sean Duncan, Eamonn Kelly, Phil Mooney, Hughie Kennedy and Gerry Gorman.

A ladies committee was formed in 1955 composed of Eileen Furey, Maggie Maguire, Norma Monaghan, Annie McCahill, Kay Gillespie and Rosaleen Ward. They were an enormous help when running functions for funds whilst we struggled in the first two seasons against more established football teams, However, with the addition of more experienced players our success grew in 1957 and we won three cups for the Warwickshire Open 7-A-Side which included all senior teams. There was no cup for the junior football league so our club presented the Four Masters Memorial Cup for this competition. 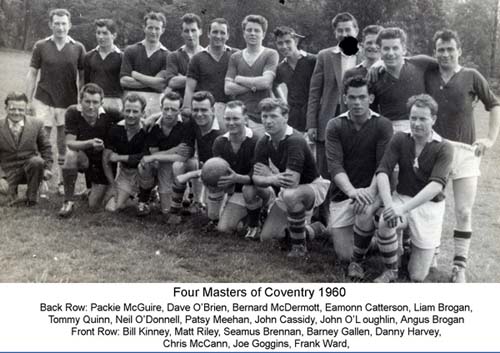 We had difficulty in fielding teams in 1955 and 1965 and special meetings were called to decide whether or not to continue. We persevered and were very fortunate in the early days when Taras, a top senior club in Birmingham, folded. Through John O’Loughlin’s Connections we were able to get some fine footballers, all of which were inter-county standard. In February 1968 we had the following players transferred to us: John Hedigan, Pat Hartigan, Tom Duggan, Jimmy Walsh, Tom Costello and Tom and John Murphy. At the same time we obtained the services of Brian Roche. In the years to come these players gave great service to the club. John was later elected as Club Secretary and official press reporter respectively. Brian Roche was a Star footballer and hurler for both club and county and was later presented with the Irish Post Gaelic Player of the Year in 1981. However, although we had a fine team, silverware was still hard to come by.

In 1974 we lost the services of John Hedigan, Pat Hartigan and Jimmy Walsh to John Mitchells and Brian Roche to Sean McDermotts of Birmingham. However, we were also fortunate to obtain the services of Enda Mullen who gave great service to the club and county. In 1972 we registered a junior hurling team with Captain Joe McKinney and Vice Captain John Clancy.

Throughout the development of the club, it was important for us to build a social base where members could meet and new members could be introduced to the social and football activities. The Four Masters Social Club was formed at the Biggin Hall Pub on Binley Road with Pat Gaffney and Charlie McDevitt as secretaries. We later purchased the Rangers Club in Clarendon Street, Earlsdon and celebrated with a grand opening on 16th December 1977 with Mick Wynne and the Country Gold Band. Our social club was the heart of the Four Masters with many members donating their free time. The club contributed a significant amount to various charities and in 1964 made a sizeable donation to the J F Kennedy Memorial at St Catherine’s Brimingham. On the 25th January 1981 the Club Hosted the Warwickshire GAA County Convention. This was a very sad day for the club as our renewal was unfairly rejected by the courts and instigated the eventual sale of the club premises. The club was closed in 1982 and the sale was completed in 1983. 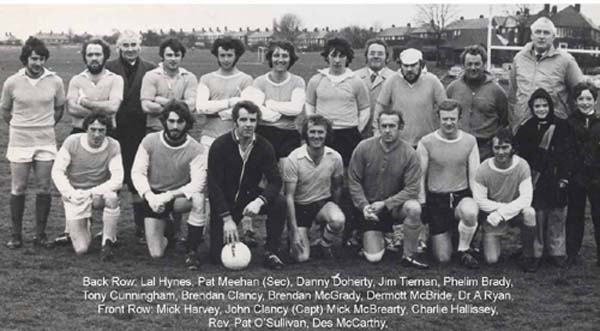 Danny Doherty deserves great praise for devoting so much time and effort into training and transporting the underage teams. He later introduced many of these players into the senior teams and they in turn have been tremendously successful. Danny and his sons, Paul, Andy and Daniel, have been the main stay of the senior team for years. 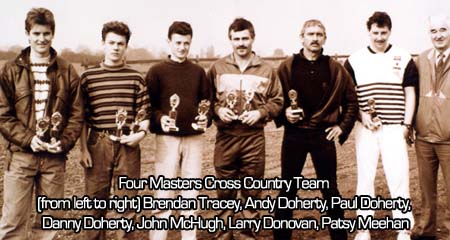 Finally, we would like to extend our apologies to all the wives, girlfriends and families who, over the years, have taken second place to the Four Masters Club!